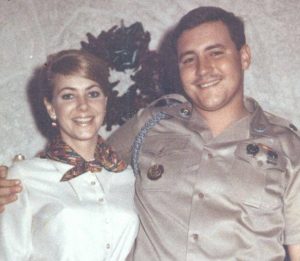 Since his passing on July 1st, I can barely keep up with daily life, let alone tend to business, pay bills, or think straight. He was and will always be my best friend… my baby brother for nearly seventy years.

My little brother was placed in my arms when I was three and a half years old. I remember the moment so clearly. Our bond never weakened, but only grew. We survived the dysfunction of our family… we always had each other’s backs. The love between Johnny and Caroline was an indestructible force that carried us both through marriages, divorces, cross-country moves, the death of both of our parents, and the birth of at least five grandchildren (so far).

We never fought. The presence of unconditional love was never a question, yet always a balm of comfort for us both. I once accidentally set his house on fire! His response was gentle and with a soft smile, “Oh Caroline… now look what you’ve done!” Shaking his head, he brought me a cup of coffee and we praised the neighbors for seeing the flames and calling the Fire Department.

I saw myself as the mean (or more accurately, ‘less-loving’) older sister, but I also led him into much popularity when I was Captain of the Cheerleaders at our boarding school in Ft. Lauderdale, Florida. He was a hunk of a linebacker on our football team, The Panthers. Johnny was the best brother a girl could ever have, bar none!

Hot burning tears drop on my computer keys as I write this. They also plopped into my oysters at a downtown Portland oyster bar when I got the text from his beloved wife that “Johnny has passed.”We immediately ordered the best bottle of Champagne, as Johnny would have insisted on, before we found our Uber ride back to the hospital. My sweetheart Will was with me at the hospital for several days in the soft and quiet hours of our farewell to Johnny. 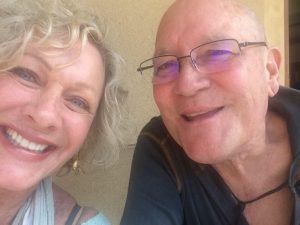 I never imagined experiencing that my next of kin would look intently into my eyes and declare, “I am ready to die. Go get those damn doctors in here and unhook me from all this crap. I want to die.” My response… “Darlin’, I am heading down the hall to get this job done.” As I resolutely exited his room, his wife arrived and assisted me in the task of alerting the hospital staff. Shortly after, the ‘drip’ began and all life support was removed. For three days we stroked and touched him lovingly as his dearly devoted mate poured her love into him and crawled into his bed to hold his body close to her throughout the eerie hospital nights.

I witnessed the presence of his beautiful, loving son and countless friends who came to sit by his side. The soft murmur of “Om Mani Padme Hum” Mantra was chanted to invoke the benevolent blessings of the embodiment of compassion by members of the Tibetan Buddhist Dharma Center. This was a vigil… a death ritual as moving as any celebration of life I have ever witnessed. One cannot live without the other. Life and Death are siblings as are brother and sister. I’m inspired now to begin my study of Tibetan Buddhism from home at Dharma Ocean.

May your Life begin again and again each moment of each day, Caroline

Oregon is one of only four states that has passed legal legislation around Death with Dignity… the FREEDOM of terminally ill people to make their own end-of-life DECISIONS.